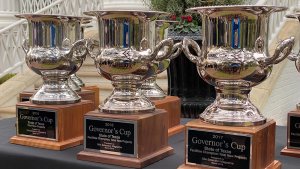 Texas is going to need a bigger trophy case.

Site Selection Magazine has awarded its annual Governor’s Cup to the state of Texas for an unprecedented 10th year in a row. The Lone Star State’s total projects of 1,123 is up nearly 44% from its 2020 total of 781. Second-place Ohio had 507 projects; Illinois had 480; California had 301; and North Carolina had 282 projects in 2021.

Texas celebrates a decade of dominance

Texans have much to celebrate with this historic recognition.  Texas’s decade of dominance means more jobs for more Texans than ever before.  More jobs mean more talent, and more talent means business leaders and project consultants will continue to look at Texas for project opportunities.  All of this is good news for Texas’s ability to continue our run of dominance.

A decade, 10 years, 3,652 days, 87,648  hours, 5,258,880  minutes.  However you calculate it, 10 years is a long time, and winning year after year is certainly no easy task.  As Michael Jordan has said, “Talent wins games, but teamwork and intelligence win championships.”  The same is true in economic development.  Teamwork amongst the Lone Star State’s 25 metropolitan statistical areas, 46 micropolitan statistical areas and everywhere in between is one of the secret ingredients in our recipe of continued success.  Add to that our pro-business mindset and steady leadership under Gov. Greg Abbott—who has won the Governor’s Cup seven times for every year he has been Governor—and you begin to understand how strong Texas is in the global economic development game.

Our future will not be without challenge.  Whether it is ongoing supply change disruptions, potential new COVID-19 variants, inflationary pressures or something yet to be known, Texas’s decade of dominance will be tested.  But, like the great sports figures of past and present, Texas does not rest on its laurels. Instead it charges ahead with its sights set on #11 —  a record even Tom Brady would like to have!