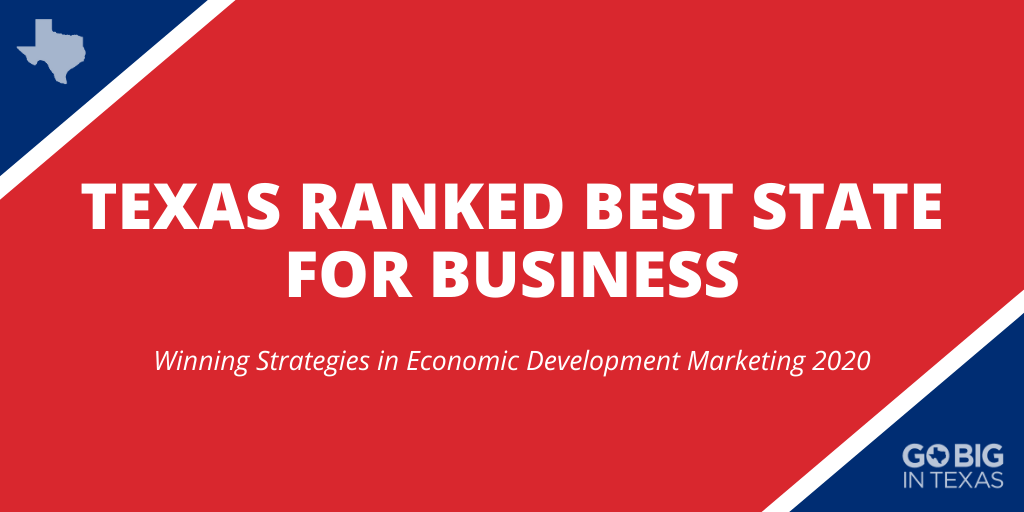 AUSTIN, TX – Governor Greg Abbott today issued a statement after a new survey of U.S. corporate executives ranked Texas the number one state for business for the eighth consecutive time since 1996. The survey was released at the International Economic Development Council (IEDC) Annual Conference, which is being held from Dallas virtually.

“Thanks to our talented workforce, welcoming business climate, and state-of-the-art infrastructure, Texas has been named the best state in the nation for business for the eighth consecutive time since 1996,” said Governor Abbott. “I want to congratulate the Texas Economic Development Corporation on their well-earned recognition as one of the premier economic development marketing organizations in the nation. TxEDC, working together with my Economic Development & Tourism Office and other public and private sector partners throughout the state, play a pivotal role in bringing more investment and jobs to our state. As we safely and strategically mitigate the spread of COVID-19, Texas will continue to expand economic opportunity for all Texans and build a more prosperous future for the Lone Star State.”

Conducted by Development Counsellors International (DCI) every three years, the “Winning Strategies in Economic Development Marketing” survey has tracked trends in economic development since its inception in 1996. The 2020 “Winning Strategies” survey is based on the aggregate responses of 316 corporate executives with site selection responsibilities.

Texas has consistently held the number one ranking since 1996, making this its eighth consecutive win. Texas earned the number one spot this year by a wide margin, with 48% of survey respondents favoring the state’s business climate compared to second place Georgia’s 25% favorability.

“We are honored to once again rank as the No. 1 State for Business among corporate executives,” said Robert Allen, president and CEO of TxEDC. “Texas has been recognized as the top state for business thanks to the leadership of Governor Greg Abbott and the incredible team of economic developers working every day in communities across the state to let businesses know that they can Go Big in Texas.”

Texas was a favorite among survey respondents thanks to many key factors. In addition to recognizing Texas’ overall business climate, 36% of respondents named the state as having one of the most favorable tax climates, 20% cited Texas’ overall pro-business environment and 17% specified its access to talent.

In addition to Texas, rounding out the top five states for business are Georgia at number 2 with 25%, followed by North Carolina at number 3 with 22%, Florida at number 4 with 18% and Tennessee at number 5 with 13%.

Texas is No. 1 in number of Fortune 500 companies
Texas adds 62,800 new jobs in April 2022
Texas’ economic dominance continues, ranks No. 1 in U.S. in GDP growth
Executives rank Texas No. 1 for business climate in U.S.
Texas in Top 5 in CNBC’s Top States for Business for 2021