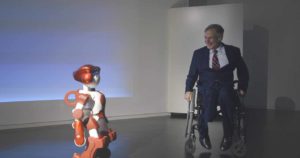 Governor Greg Abbott today met with Hitachi, Ltd. CEO Toshiaki Higashihara in Tokyo, Japan. The Governor thanked Mr. Higashihara for Hitachi’s investment in the state of Texas, and discussed Hitachi’s experience of doing business in the Lone Star State. Following his meeting, Governor Abbott toured the Hitachi Executive Briefing Center. The meeting is part of Governor Abbott’s week-long economic development trip to Asia. A readout and photos of the meeting can be found below:

Toshiaki Higashihara has been Representative Executive Officer, President & CEO and Director of Hitachi, Ltd. since 2016. Higashihara has been with Hitachi since 1977 and has held various roles during his tenure. In 2018, Higashihara received the Leonardo International Prize in Italy. The award is presented to business leaders from foreign companies that have made substantial contributions to strengthening relationships with Italy. Higashihara graduated the University of Tokushima with a degree in Engineering.